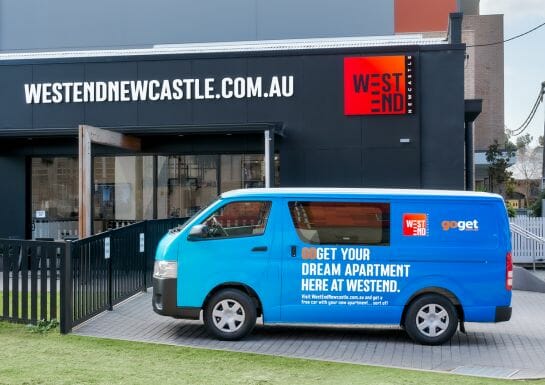 Australia’s largest car-sharing network, GoGet, has launched in Newcastle, with plans to build a 100 strong fleet of cars and vans.

It comes after an agreement was struck with development company, The Thirdi Group, offering apartment buyers or their tenants free GoGet driving credits.

“We see this type of offering right in line with Home Automation, integrated appliances and the high-end fixtures and fittings we are now offering in our apartments,” Mr Berry said.

“There’s great stories of downsizing where people are going from a house to an inner city living apartment, going from two cars to one and using GoGet as their secondary vehicle. It makes sense.”

Ten per cent of GoGet’s estimated fleet will be permanently be located in Wickham’s West End precinct.

Eight will be situated in the basement of developments, Eaton on Union and Stella on Hannell due for completion next year, while one will be at West in the precinct, the other in-front of the display suite.

Josh Brydges, locations and transport planner from GoGet said Newcastle has been on its radar for a long time.

“We’ve been watching all the changes and developments going on and looking at things council has been doing with its smart strategy, and then we formed a great partnership with Thirdi,” he said.

“The future of transport is right here in the centre of Newcastle. It’s an alternative to private car ownership.”

Not only is the partnership said to save developers millions in construction costs, overall costs for buyers are reduced, increasing affordability of apartments.

“Newcastle has more smart shared transport options than some capital cities,” he said.

TO READ THE ARTICLE HEAD TO: