Over the past 12 years Thirdi Group has been very lucky to be included in a range of media & industry awards, recognised in how we combine traditional property development & investment strategies with in-house developed technologies.

We are proud of our innovative approach to property development and we believe it’s our simple philosophy of ‘Investing where Investments are being made’ that has helped our company secure its place as one of the fastest growing development firms within Australia. 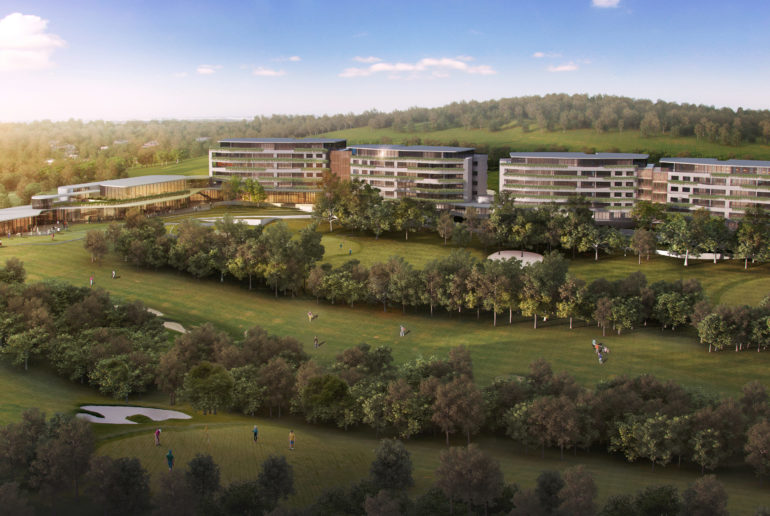 By Rohan Clarke
Small rather than large residential gold estates is the new trend in golf-course living. And seniors living developments are at the forefront for many clubs that wish to secure their long-term future. Australian Golf Digest spoke to three experts about the phenomenon of ‘Retiring On The Fairway’.

Seniors Living: The Merewether Experience
Merewether Golf Club in Newcastle has taken advantage of zoning legislation in NSW to create a seniors living development in exchange for course improvements and a clubhouse redevelopment. However, Merewether will retain ownership of the land to be used for the retirement complex. Merewether is leasing a 1,400sqm parcel of land for 99 years to property developer Thirdi, which is building six floors of apartments for over-55’s.
A minimum of 150 units is planned, depending on the development approval. Private golf clubs that own their own land are subject to state planning legislation. In NSW, seniors living complexes designed for over-55’s are permitted on golf courses even if the zoning is non-residential. The NSW government actively encourages these properties for pensioners or older couples under State Environment Planning Policy Number 65 (SEPP65) whereas Victoria and other states don’t make allowances. Therefore, in some cases, it’s actually beneficial to have zoning as RE2 (recreational private) as opposed to general residential because it provides greater scope to undertake development.
For example, Merewether is able to pursue a development with unlimited height restrictions. Whereas if its land were zoned residential it would have a limitation of say, two floors. Merewether put its development plan to tender on the open market to identify who had the best offering. The value of the land was placed at $16.5 million, which is the total amount the club will receive from Thirdi. Merewether has allocated $9 million for the construction of a new clubhouse. At least $1.5 million will be spent on course renovations as a consequence of the seniors living development. That provides for relocation of the maintenance shed and ensuring the course remains as an 18-hole layout and at least a par 70 during the construction period. Another $500,000 has been set aside for temporary facilities while $3.5 million will be invested into income-generating assets.
Rather than selling off part of its course Merewether is actually leasing the parcel of land to Third over a 99 year period. The developer has the right to put a seniors living development in place. The golf club earns an income off the lease and Merewether also receives a percentage of the deferred management fee (DMF). The contract accords the golf club a percentage of any apartments sold under the banner of that development. So Merewether collects 2% of the value of apartments that are sold to members (for instance, $20,000 on $1million unit). The developer wishes to minimise costs in the marketing of the apartments and similarly the golf club wants as many members as possible to buy into the units. Then every time an apartment is re-sold, a management fee is applied to the sale price. This is typical of all seniors living or aged-care units. For example, a person buys a seniors living apartment for $1 million.
The person lives in that unit for 15 years before its sold for $2 million. In the Merewether instance, the DMF is 25% of the $2 million which is $500,000 and the golf club gets a share of that DMF. All the risk is with the property developer rather than the golf club. Merewether retains ownership of the course but still gets the benefits of being able to utiliser it, says Aaron Spalding captain of Merewether Golf Club.
“Everything has been funded by the developer. We don’t do anything until we’ve either got the money from the developer or there is an approval stage which says we’re going to get the money.” Off the back of what’s occurring at Merewether, Spalding formed a company (Valentem Consulting) to advise golf clubs. he figured that private golf courses have become targets of developers because they are asset-rich in terms of land. Because of the nature of club cards, they don’t necessarily have the knowledge to equally negotiate with developers. With a background in finance and general management, Spalding says: “I have seen clubs not receiving full value from developers, in some cases outright predatory behaviour, so I’m seeking to help them out where I can.”
While development deals exist for private golf clubs that own their land, there are still opportunities for ‘public’ courses that lease land from a council, water utility or other landlord. Spalding says it’s worth examining the terms of the lease and what it allows.
For instance, if a club has a 50-year lease and the lease allows building on that land. It may be a case where it requires a renegotiation with council to say this is what needs to happen to ensure the ongoing viability of the golf club.
As long as council wants to ensure the ‘green space’ is maintained and isn’t seeking to replace the golf course with sporting fields, there is still scope to renegotiate a longer-term lease. And the longer the timeframe that is available, the more attractive the return from a developer’s viewpoint. Additionally, the prospect of a seniors living development integrated with the course delivers increased rates revenue to council.
Thinking laterally, senior residents have the potential to be the lifeblood of a golf club. A seniors living operator has a legislative requirement to provide food to all of its residents. So if a golf club puts in a caveat for food/beverage across the entire area, suddenly the club is in a position of authority to control the pricing and generate revenue. Golf clubs need to think outside the square rather than “next year we’ll get 25 new members”. First National Real Estate’s Ellis says golf clubs may need to make brave decisions with regard to their land use: “It comes down to how a golf club is going to maximise their investment. Their strategic
plan is to get more members. Well, how are they going to get more members if golf is a dying sport? How are they going to protect their asset?” 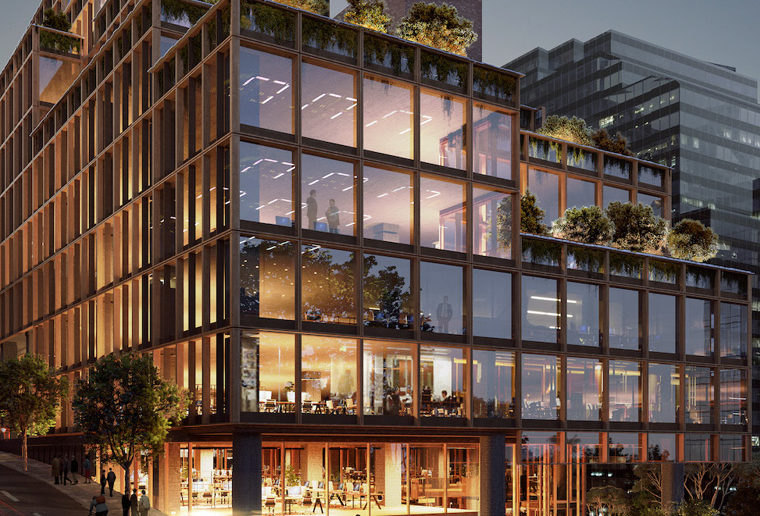 Sydney-based developer Thirdi has listed a mega development site—comprising five buildings in North Sydney— which could pave the way for a $330 million mixed-use development.

The site comprises the consolidation of a series of residential apartments across five buildings—located at 2-4 Blue Street and 1-5 William Street— a few hundred metres from North Sydney’s bus and rail interchange.

The deal took more than a year to complete including three apartment blocks that were company-titled, while the other two were strata-titled.

The 2,326sq m site is being listed by CBRE and JLL, potentially paving the way for a circa $330 million office or residential project with eventual views of the city skyline, Harbour Bridge and Barangaroo.

“We saw a massive opportunity, regardless what type of development we ultimately delivered to maximise its strategic location in North Sydney’s CBD core and also take advantage of the outstanding views of Sydney Harbour, the CBD and Barangaroo,” Thirdi Group’s Robert Huxley said.

“Even with the unsolicited offers, from our point of view, it’s business as usual.

“We will continue to work with our architectural firm Woods Bagot and other consultants to create an outstanding building.”

North Sydney’s CBD has benefitted from major office developments including 100 Mount Street, which was close to fully leased when it completed recently and 1 Denison Street, which has pre-commitments from major corporate tenants moving into the market including Nine Entertainment Co. and Microsoft.

“The size of the project means a nimble developer could capitalise on the current strength in the North Sydney office leasing market and potentially deliver a new office building by 2021 to coincide with a forecast spike in tenant demand,” Gray-Spencer said.

Thirdi, known for its inner-city Sydney apartments, has recently made a foray into retirement living and aged care development.

The developer will now aim to submit a development application with North Sydney Council by the end of October. 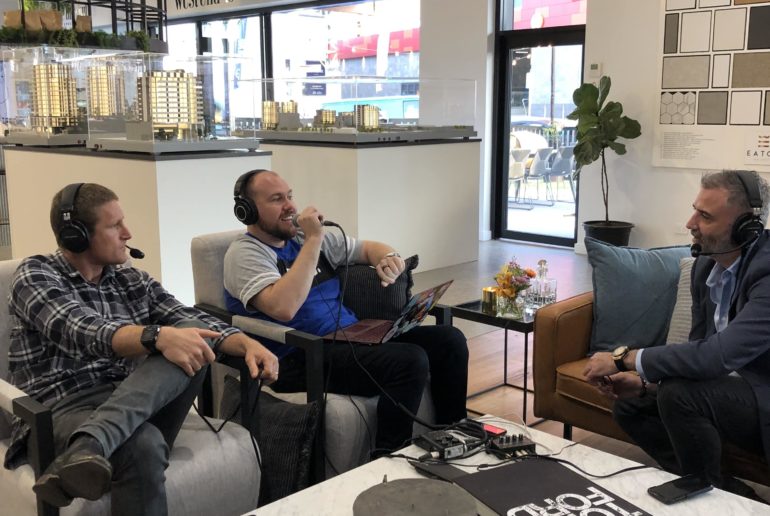 Recently one of our founders Luke Berry sat down with co-founder of CRIBZ, Dominic Nesci.
CRIBZ provides insights and actions to reduce acquisition costs and increase long-term client value.
The chat is perfect for anyone wondering how Thirdi Group came to be, or if you want to learn more about Luke Berry.
Give it a listen to find out the future of real estate.

Buy an apartment and drive for free

When a Pair of Graffiti Artists Vandalised One of Thirdi Group’s Sites, Co-Founder Luke Berry Hunted Them Down

Live a vibrant and connected lifestyle at Eaton on Union

Harbour views and high-end interiors at Stella on Hannel

Sydney apartment launched with its own car elevator

Old meets new: Future proofing with a heritage twist at The Gentry

Alexandria: The suburb in transition on the inner-city fringe

The third housing type that everyone’s talking about

There’s a car in my lounge room: drive straight into Pyrmont pad

Why developers are teaming up with luxury partners

A FUTURISTIC LUXURY MAN CAVE IS COMING TO SYDNEY

Doors Barely Open On Paragon Of Pyrmont Before Sales Frenzy

Written by The Urban Developer | September, 2017

How to secure the most lucrative property in Sydney

Blink and you’ll definitely miss out. That’s how quickly the demand for property in Sydney’s city fringe suburb Waterloo is attracting attention. And the latest residential apartment development to hit the streets – Iconic is no exception. | March, 2017

SJB Architecture And Design Talk With Us About The ICONIC

ARTi listed as a finalist for REINSW Awards for Excellence!

Thirdi recognised as an ABA100 Winner in The Australian Business Awards 2016 for Product Innovation!

An oasis of green in the heart of Waterloo

Upsize your Freedom⁠ Are you thinking about down

NEW YEARS DAY ⁠ The perfect day for setting out

HAPPY NEW YEAR!⁠ Wishing everyone a happy and sa